Skip to content
Flags-World » Flags of Europe » Flag of Poland: colors and meaning 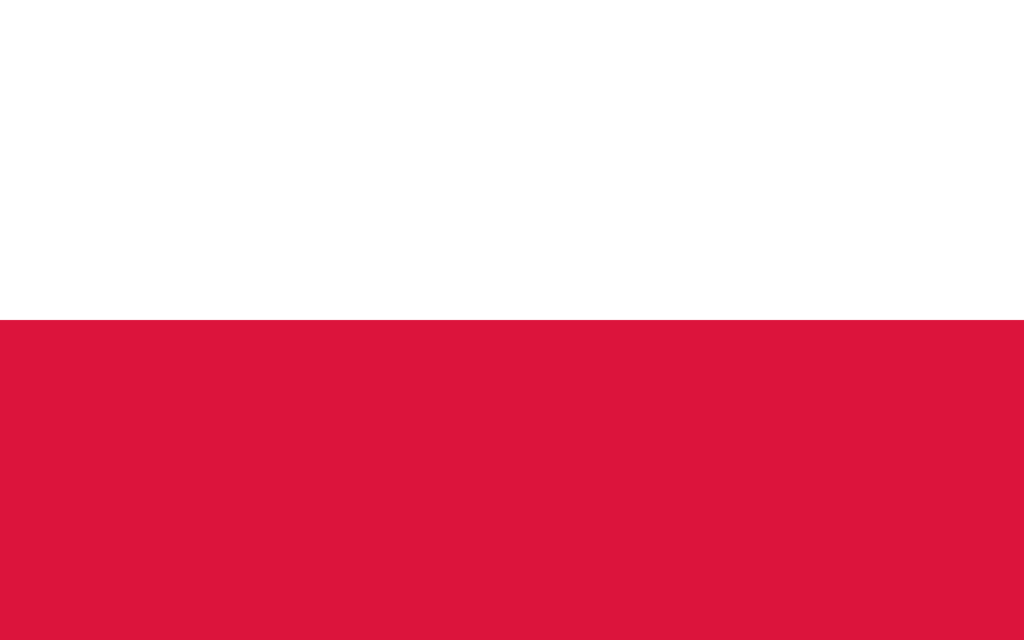 The flag of Poland has a long history. In 1025, the kingdom of Polish appeared. The first lord became Prince Boleslav I brave. His banner imagined a red rectangle with a cut on the right piece in the form of a rectangular trapezium. The right upper corner of the red field was sharp. The banner depicts a white eagle in the Golden Crown. This option has existed before the formation of the newest country of the Commonwealth in the 2nd half of the 60s of the XVI century. 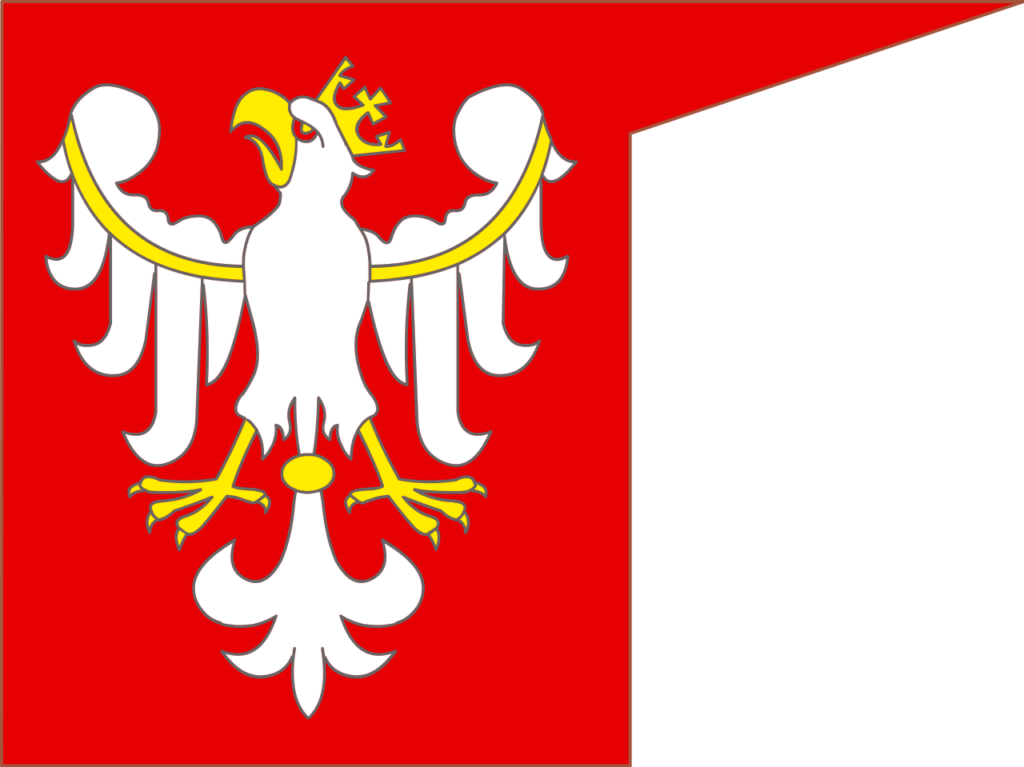 The head of the speech by the compulculated was called the Lord of Polish and Prince Lithuanian. The flag was a rectangle, exhausted horizontally to three equal stripes – the last two red, central – white. The free edge of the strip acted in the form of triangles. In the center of the banner, there was a coat of arms in a gold (yellowish) frame, divided into 4 parts. In the left upper and right bottom, there were images of white falcon – Poland sign. The right upper and left lower part occupied Lithuanian sign – Equestrian knight. From above, the coat of arms of Vallen Crown. 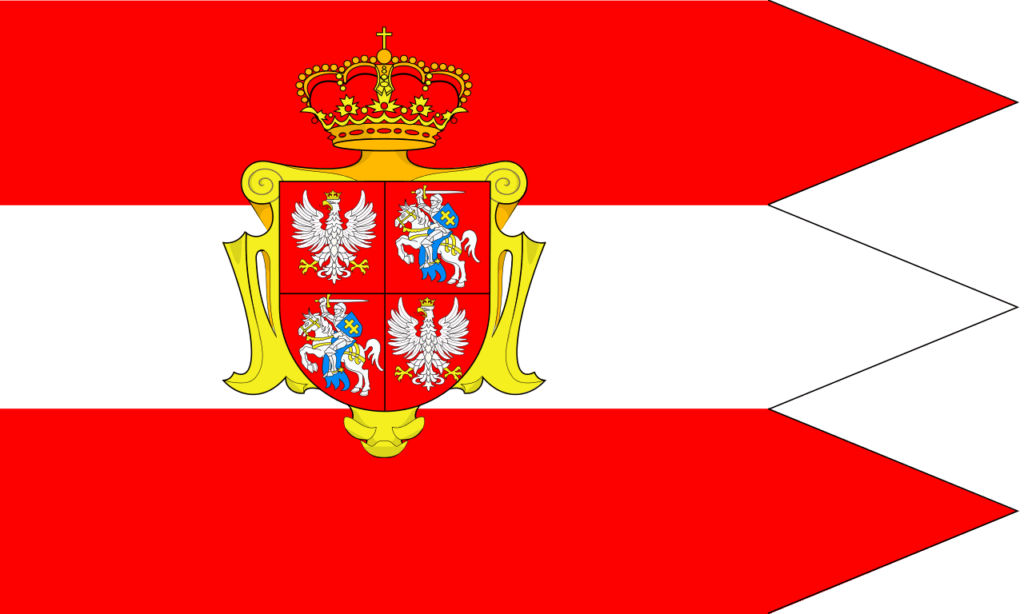 In 1587-1668 y. State Rules, Swedish Family of Vasa (Vase). Her representatives were instantaneously heirs of the Swedish throne. Based on this coat of arms on the banner of the Commonwealth, Perezpöllow change. On the past coat of arms with Sokol and the rider was imposed the coat of arms with golden signs – lions and Swedish crowns. The center has placed the symbol of the house of Wasa – Golden Sheaf on the White-Blue-Red Field. The coat of arms is surrounded by a chain and has a golden rune order. 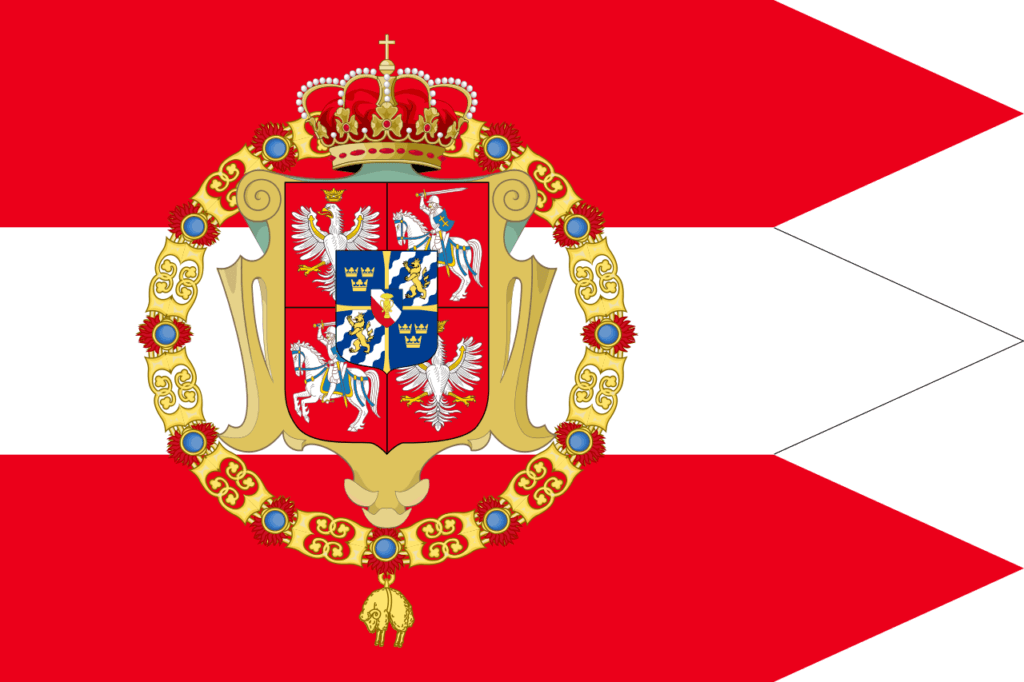 In 1697-1763. The Hermann family of recreation. On the banner of the country at the moment, the coat of arms of the ruling family, decorated with a crown. He folded from 2 parts. Left – divided horizontally to the upper black and lower white terrain, on top of which two intersecting blades of red color are depicted. Right – in the form of horizontal alternating gold and black stripes with superimposed right bandage in the form of a root crown. 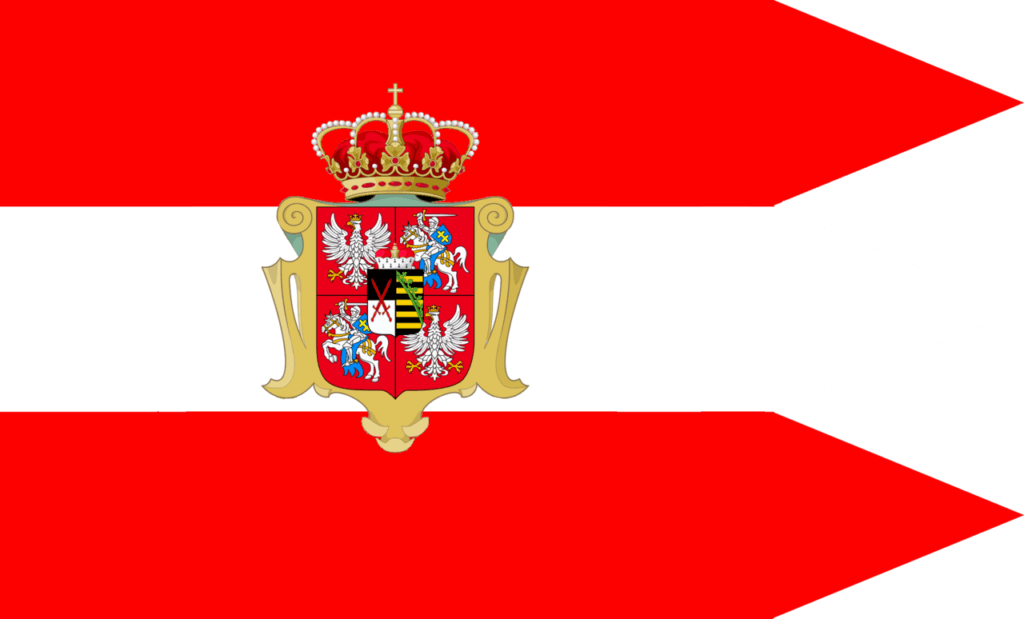 In 1764-1795. State of the rules Stanislav Augustus understood. He was the last ruler of the Commonwealth. On his flag on top of the coat of arms of the country, the coat of arms “Ciolek” – a red calf on the white (silver) field, decorated with a crown. 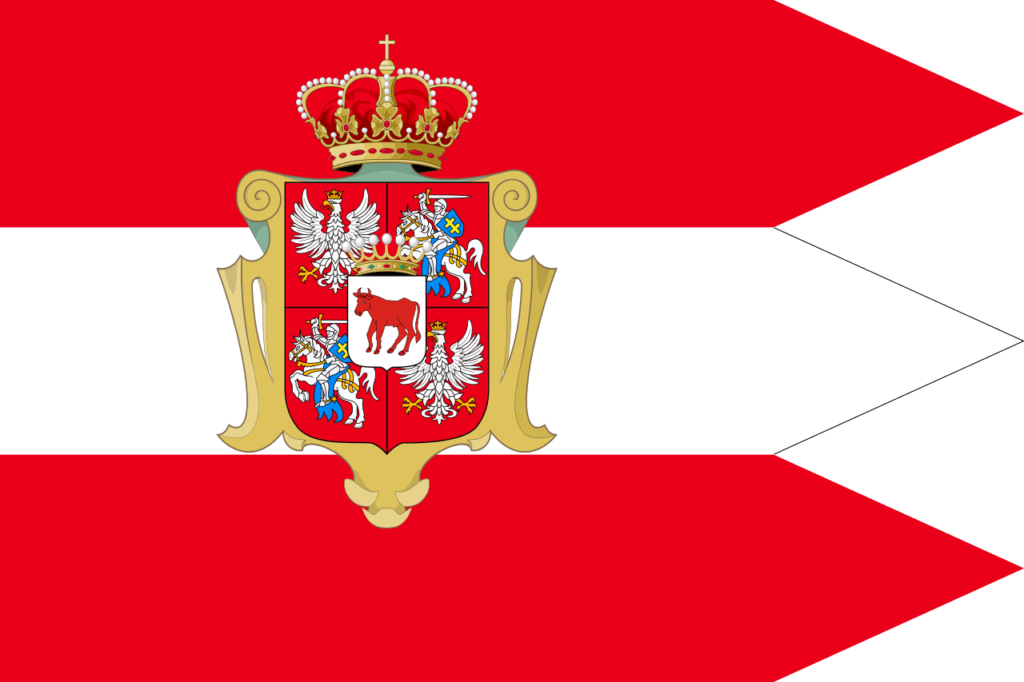 Flag of Warsaw Duchy, existing in 1807-1815., There was a rectangular cloth, divided into two horizontal stripes of monotonous width – top white and lower – red. 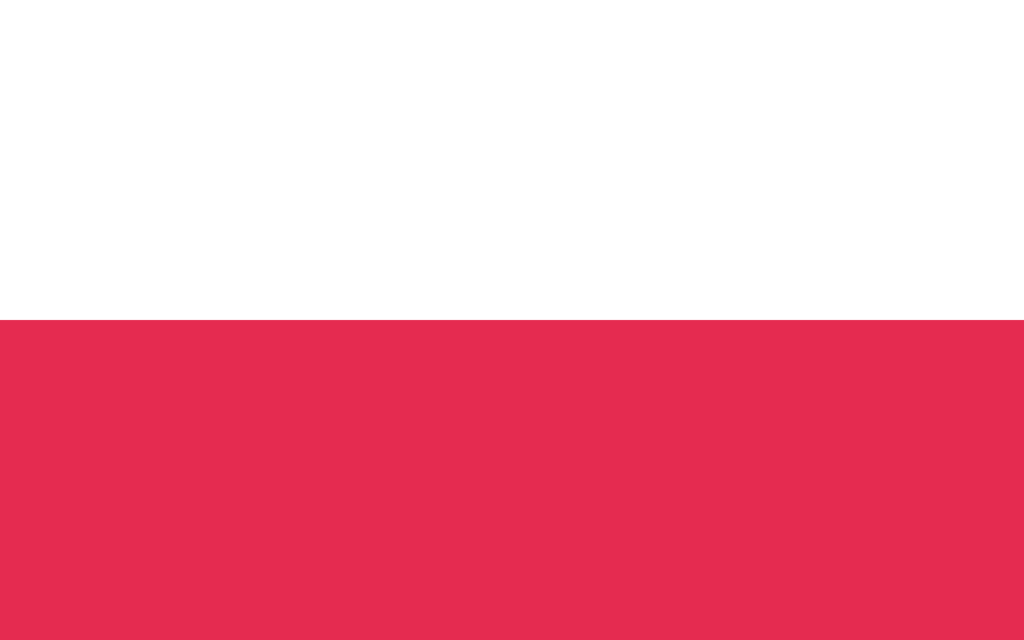 Since 1815, according to the results of the Napoleonic wars, the Kingdom of Polish entered the Russian Federation. His flag in 1815-1832gg. It was a white rectangular cloth with a double-headed falcon – a sign of the Russian Federation. Sokol’s heads decorated crowns. 3rd, a big crown with blue fluttering ribbon crowned the whole coat of arms. One paw Eagle held a scepter, 2nd – power. On the chest of a double-headed eagle, the emblem of Poland was signed – a white eagle in the crown. This coat of arms covered the imperial mantle and married the imperial crown. 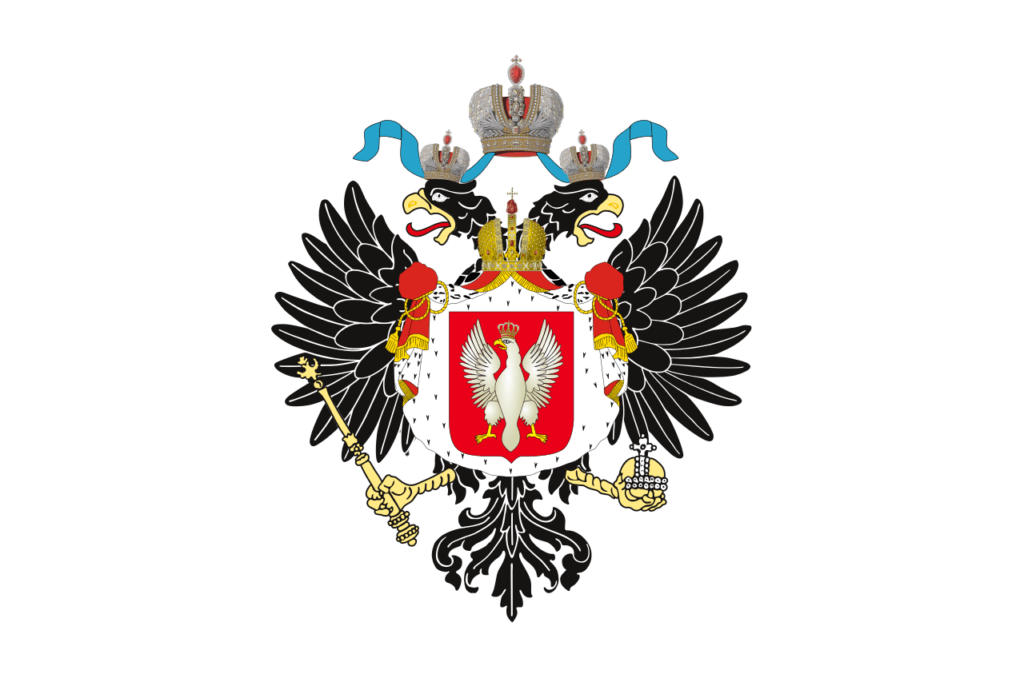 In coordination with the answer of the Vienna Congress, Western locals of Warsaw Duchhood entered the Grand Duchy of. The princess flag in 1815-1848. It was a rectangular cloth with 2 equal horizontal stripes. Top – red, lower – white. 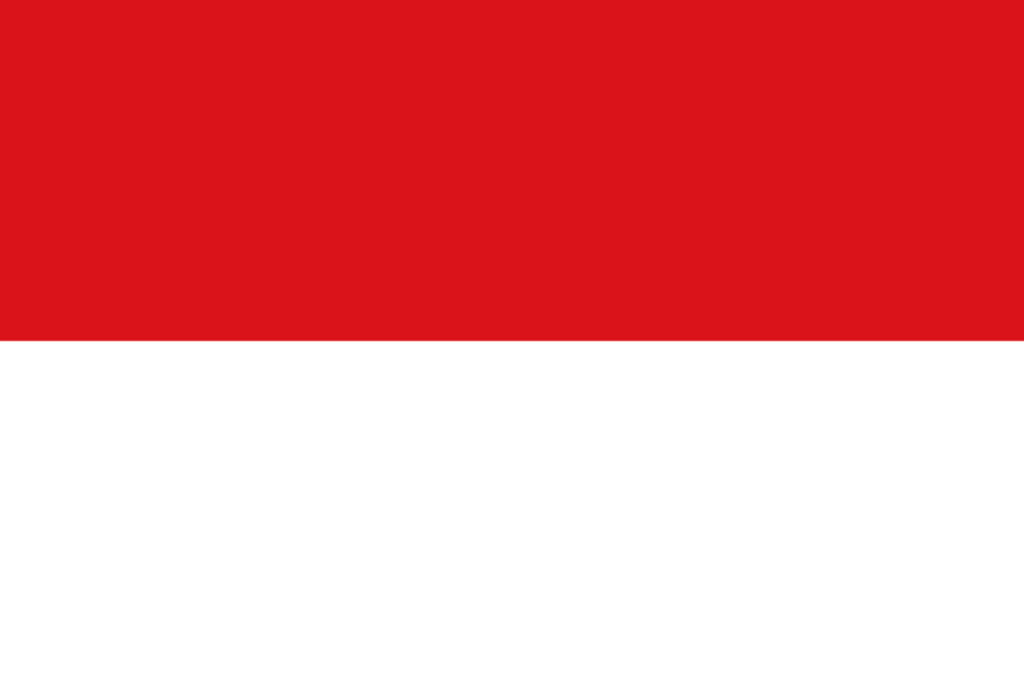 The State Flag of Poland was legally approved by the Seimas in the first half of the 30s of the XIX century. The requirements of the patriotic population on the development of a long and recognizable sign of the country were preceded by this event. Two benign for Poland colors were chosen. During, that time, at that time, at a time when the country came into RF, National signs were prohibited. At the end of the restoration of independence in 1918, the banner returned. At the end of the 2nd global, inhabitants of Poland used the state flag as a sign of combating the communist regime, hanging it in the course of strikes. The 1980 Law recognized the country’s sign, not the flag itself, and the colors and white red put in the form of single stripes. At the moment, in coordination with the government order, the state flag is highlighted in non-invalid order in the following solemn days: international labor days, celebrated on May 1; In the following days, the days of March 2 and 3 – Deneke of the flag and the Deneke of the Constitution and November 11, on Independence Day.

In coordination with the law of January 31, 1980, the flag is a rectangle with the colors of the Polish coat of arms. The canvas is divided horizontally into two areometric stripes. Top – White, Lower – Red. Width ratio and flag length 5:8.

In regulatory documents, more than once clarified the shade of red. It was defined as “the color of the sea perch”, and later like a red. In the first half of the 80s and the years, colors are fixed. Red Complies RGB (Hex) # D4213D, and White RGB (Hex) # E9E8E7. First, instead of the Red State being considered purple, showing his spiritual wealth and greatness of the people. But because of the huge price of the dye to use he had the opportunity only rich people.

White color in heraldry corresponds to silver or water and evidence of higher spiritual treasures, morality, and perfection of purity. Red tones personify courage, courage, courage, self-sacrifice. The colors of the Polish banner are similar to those used in the image of the coat of arms. From this one more interpretation. People deeply honored the white eagle. And red testifies sunset under the wings of this bird. For Poles, White Eagle – Truly Popular Bird. In coordination with legend, Prince Lech saw proudly swaying on the White Eagle tree. He considered it a sign of more. Lech founded on that place the first capital and called her nest. The white stripe is located above the red, t. To. The coat of arms reveals above the background on which it is located.

Other flags of Poland

In coordination with the law on state symbols, in Poland, there is another flag recognized by the state. He was introduced in 1919. This is an analog of two-way 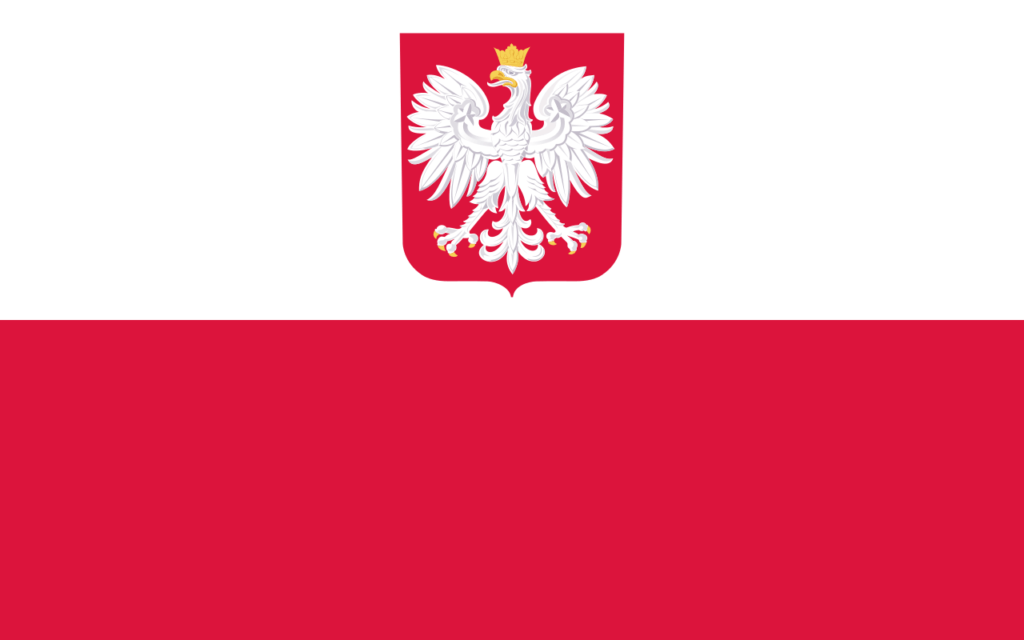 Option, but with the coat of arms in the center of the highest part. It is not used everywhere. Designed for diplomatic missions and consulates, and shopping ships. Within 10 years, since 1928, only on commercial vessels, for the difference from the flag of the International Signal Code, which has the same colors. Later, the effect of the flag spread to civil airports, airports and airplanes abroad, and port controls. The naval flag has an aspect ratio of 10:21. White stripe from above, red bottom. On the highest part – coat of arms. The free side has a triangular cutout.

The historic flag of the Czech Republic has similarities before mixing with Polish. They differ only by the aspect ratio. Flags Indonesia and Monaco Apart from this fold from the 2 horizontal strips – red and white. But both of these flags are inverted Polish. The aspect ratio does not converge. In Indonesia, it forms 2:3, and the flag of Monaco – 4:5, while the Polish banner has a ratio of 5:8. The difference is also in the shades of red. 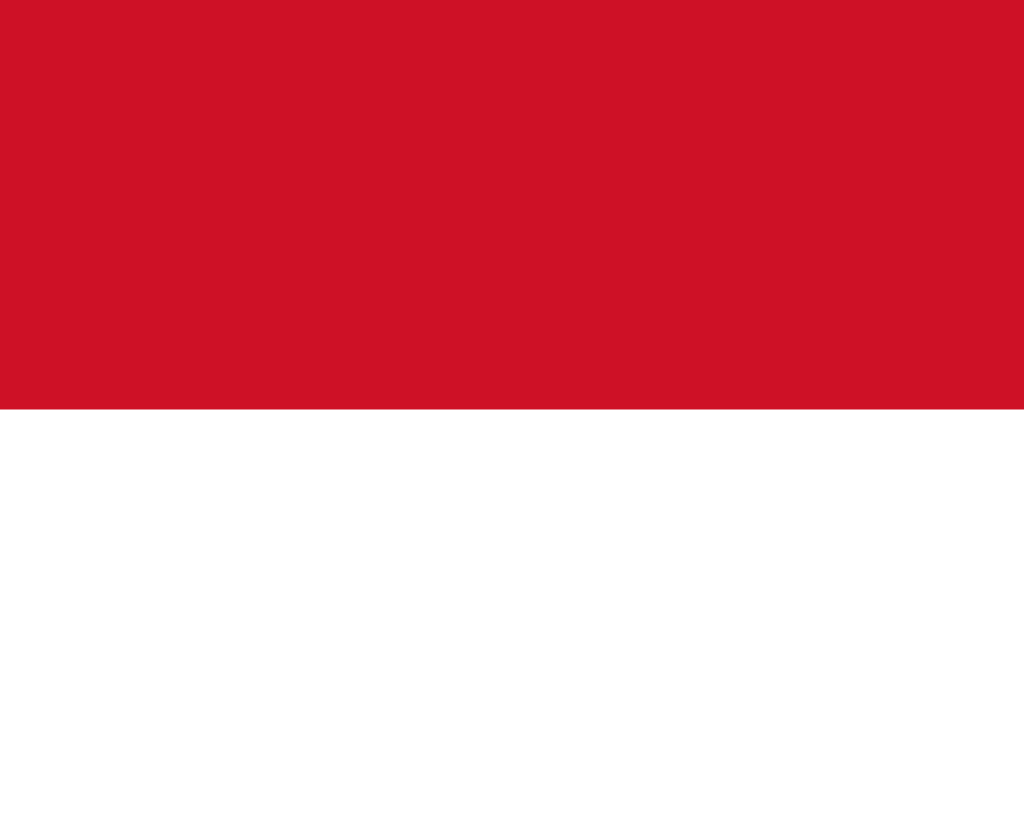 Spectate resemblance to the signs of some countries leads to the incidents. So, for example, in the Booklets of Southeast Asia prepared for the 29th games, the Banner of Poland, who does not have any reason to the region. It was written instead of the Indonesian banner. This fact led to the indignation of the Indonesian side, which demanded to reprint booklets. At the moment, in the course of state solemn days, patriotic poles rolling ribbons to clothing, repeating the colors of the state sign.