Skip to content
Flags-World » Flags of Asia » Flag of Turkmenistan: meaning and image

The flag of Turkmenistan is considered one of the most complex flags. The base consists of a dark green stripe with five white five-pointed stars and a white crescent symbol in the top middle part. The left side of the banner contains a vertical strip with patterns that are used in the manufacture of carpets. 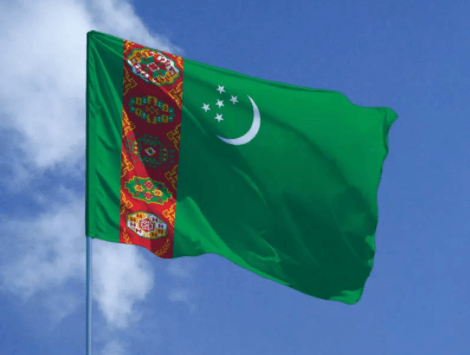 Turkmenistan is a famous carpet manufacturer, and that is why this template is used. The crossed olive branches are placed under the pattern, which means the world. Five patterns and five stars represent 5 large Turkmen tribes and 5 provinces of the country. At the same time, the stars, along with the crescent and green, are traditional symbols of Islam.

The version of the acting attribute was adopted on January 25, 2001. The country’s banner has civil, as well as institutional use, not military. Can be posted on civilian courts on behalf of the government.

The colorful flag of Turkmenistan has many values ​​that provide links to important parts of culture, religion, and other ideologies used in the country. 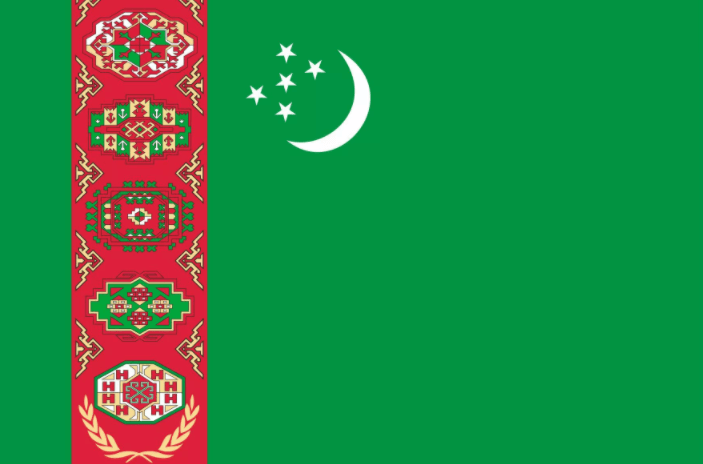 Red and green – these are traditional colors in the culture of the Turks, which are present everywhere:

There are five large families in Turkmenistan, and each of the 5 tapestries in the group is embodied in it. Attributes are designed in full compliance with existing traditions and taking into account political features.

The flag of the Turkmen Soviet Socialist Republic is represented in the form of rectangular red cloth with two celestial strips in the center, slightly separated (both depict the Amu Darya and SYR Darya rivers), with a golden hammer, sickle, and a star with gold edges at the top of the canton. He was adopted by the Turkmen SSR on August 1, 1953. This is a modification of the National Flag of the USSR. 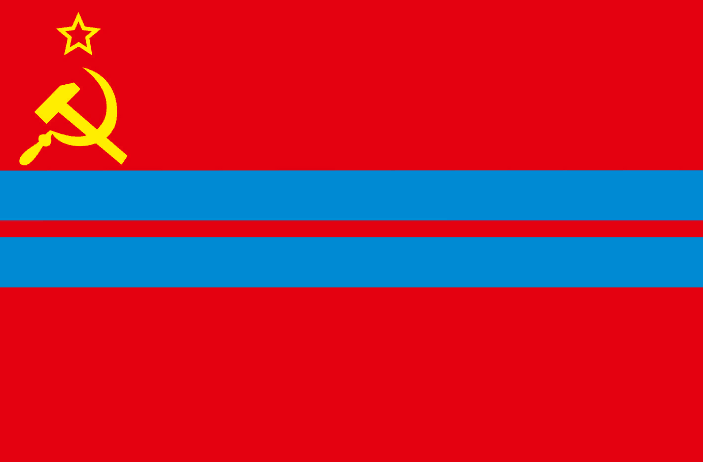 Day of the Constitution and the State Flag of Turkmenistan

Turkmenistan is located in Central Asia. In the north-west, the country borders with Kazakhstan, in the north and northeast with Uzbekistan, in the south-west with Iran, in the south-east with Afghanistan, and in the West with the Caspian Sea, although it is considered a state that does not have access to the sea.

The Karakum desert occupies most of the country, the main river channels of which are Amu Darya, and Murgab. His capital and the most densely populated city-Ashgabat.

The day of the Constitution and the State Balloon since 2018 is celebrated on May 18. Previously, the day of the holiday of Turkmenistan was celebrated on different dates that were merged in October 2017. Currently, the celebration has acquired a larger scale.

The Constitution was approved in 1992 on May 18. On this day, at a solemn ceremony, there is a laying on the monument of the Constitution, which is located in Ashgabat. After laying the colors, everyone goes to the main square to attend to the rays of the National Flag. The holiday of the state banner is celebrated solemnly, and this day is declared a day off.

A very interesting fact: the symbol of the country raised on the occasion of the celebration of the birthday of the president of the country, is listed in the Guinness Book of Records because of the highest flagpole and a huge cloth. The height of the tree is 133 meters, and the flag of the flag is 52 meters, with a width of 35 meters.