The Republic of Mozambique is in the southern part of Africa. Not paying attention to the tremendous distance between Russia and her, there is something that binds our countries. Second words – sign depicted on the flag of Mozambique.

So the modern flag of Mozambique looks: 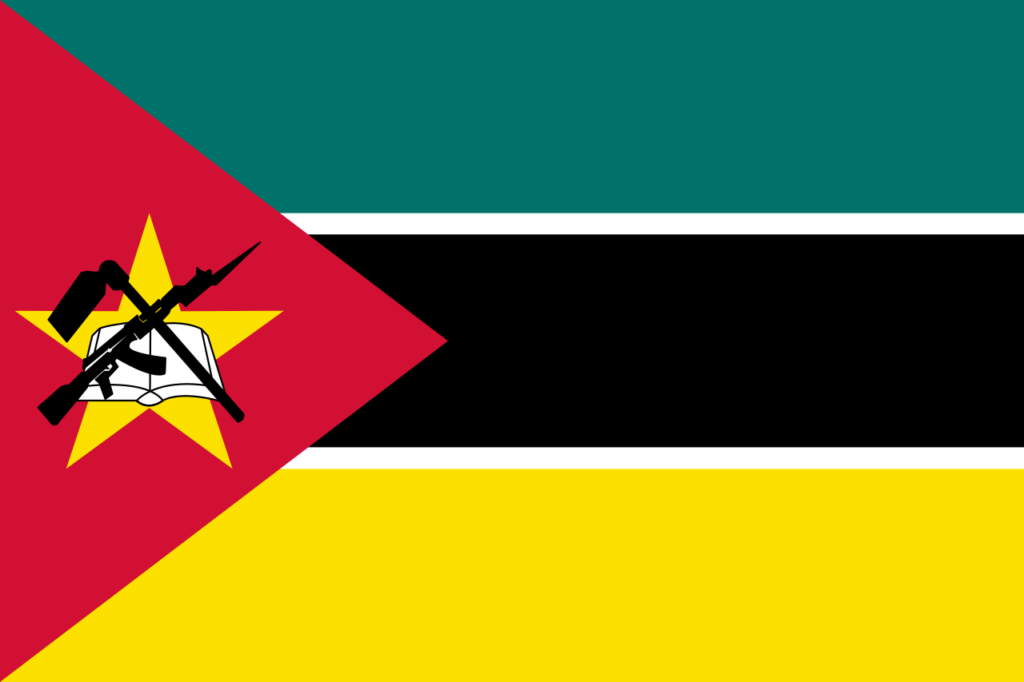 The flag of Mozambique is one of the municipal signs of the Republic of Mozambique. The modern version of the flag is accepted in the first half of the 80s of the XX century.

Before the liberation of, Mozambique was Portuguese Colonia.

In the 2nd half of the 60s of the twentieth century in the book dedicated to the coat of arms of subordinate Portugal Land, her creator of Almeida now gave the Council to introduce for the overall possessions of the Base of Municipal Sign of Portugal itself. Surgeons with this were proposed to be on the cloth the coat of arms of a certain province. The coat of arms of Mozambique at that time was a shield folding from 3-parts. In the lower part, the waves of silver and greenish colors were depicted, upstairs, on the right – 5 shields with five nails, on the right – seven grows greenish, embroidered with a red braid. 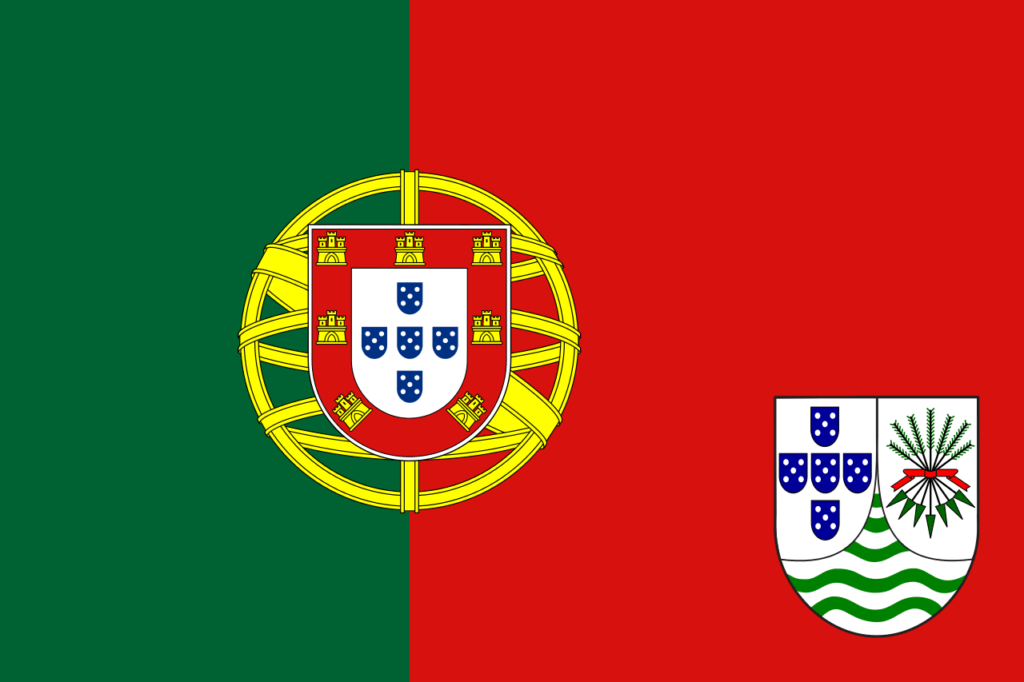 But the government of Portugal not believing this did not consider this proposal, and even more – to have the coat of arms of Mozambique on its flag.

In the 62nd year of the 20th century, at the end of the creation of the front of the liberation of Mozambique (Frelimo), an example resembling modern. Green, black, yellow stripes, shared white, and – red triangle, adjacent to the. 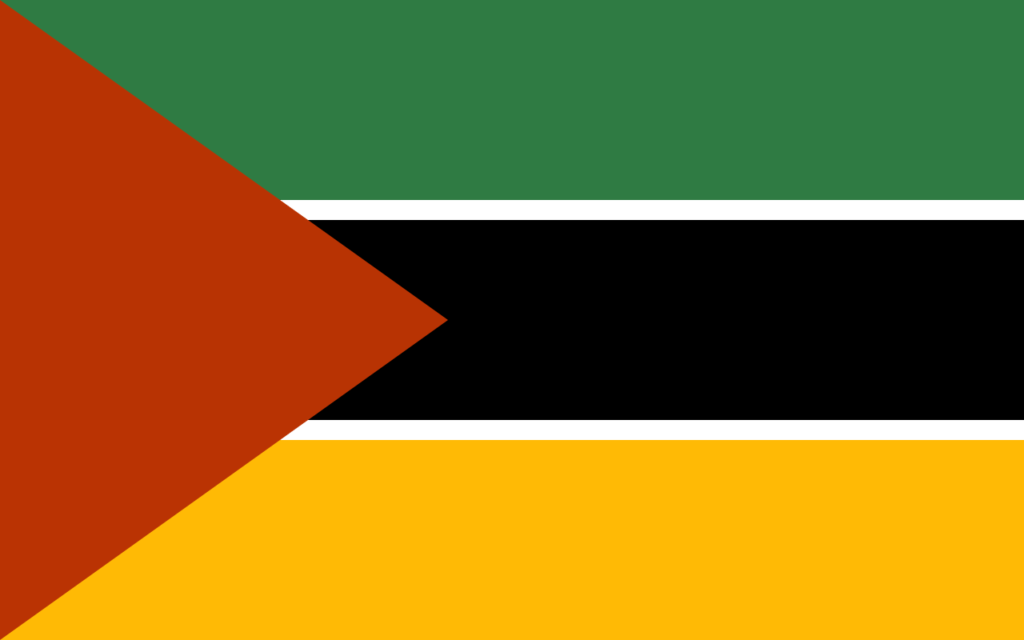 In 1975, independence was proclaimed and new. Saving the colors of the strips, the creators have placed them in the form of 7 wedges, separated from a non-specialized point in the upper left corner. In the same corner, the emblem with an open book, ask and hoe. 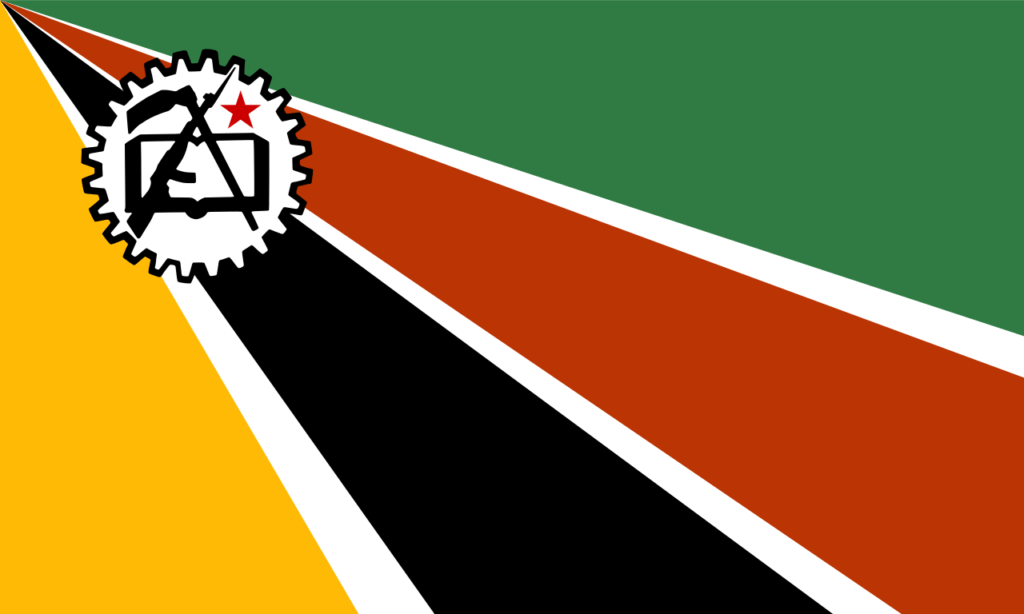 In April 1983, the flag of Frelimo with the added sign of the open book, AK and Moth. 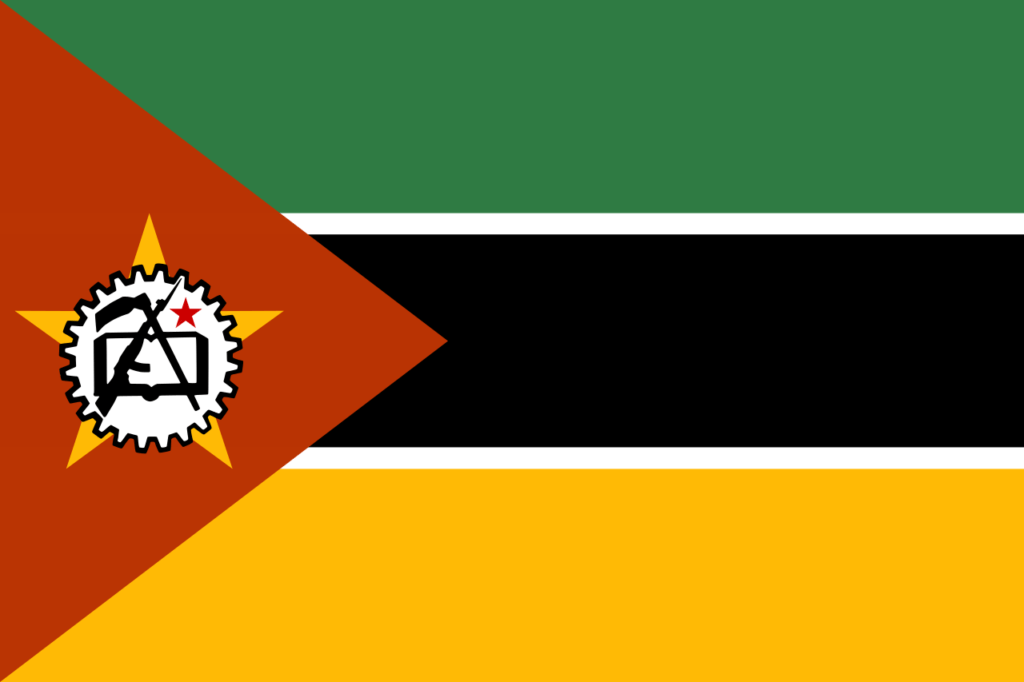 The modern version is approved by the original Day of May 1983.

In 2005, an attempt was made to update the flag, coat of arms and the hymn of Mozambique: 119 works were presented, not counting this elected the best offer, but later this was not advanced.

The flag of the Republic of Mozambique looks like a rectangle, which includes 3 wide bands located horizontally. Strips have equal width. Colors of stripes from top to bottom: green, black, and yellow. They are divided from each other with narrow white stripes.

The string is placed in a red triangle. Its foundation converges with the waters of the flag. Two other parties, monotonous size, form a sharp angle, directed towards the center of the panel, without reaching the central point.

In the middle of the triangle – a five-pointed star of the yellow color of huge size. On the star posted an open white book. On top of it – a stylized image of crossed hoes and a Kalashnikov machine, painted in black.

At the moment, Mozambique is the only government in the world, on whose flag is.

On the rectangle there are 5 colors, second words:

At least some of them – not accidental, has a personal essence.

Kalashnikov citizens of the country were on the state symbol in the symbol of recognizing the unusual role of AK-47 in the fight for independence.

Have been taken repeated samples to remove from the flag. In particular, diligent opposition tried at the end of the release of the movie “Armory Baron” with Nicholas Cage in the main role.

The American militant used a layout of a head brave, Russian businessman Victor Booth, whom the management USA condemned for a long time for illegal trade in the gun. In the movies, the delivery of guns in Mozambique were discussed Mozambique.

0
Tunisia Republic (Tunisia) – Government located in North Africa off the coast of the
Leave a Reply Cancel reply
← Flag of Mongolia: colors and meaning ← Flags Pakistan: image and meaning