Skip to content
Flags-World » Flags of Europe » Flag of Montenegro: meaning and colors

Flag of Montenegro – State symbolism, which was adopted in 2004. Made on a red cloth, which has golden edges. The aspect ratio is 1:2. In the center is the coat of arms of the state.

An unofficial version with a red-bare-white tricolor, in the center of which the yellow eagle is embroidered. This staging could be seen during the exit of the country from the Union with Serbia (2006). 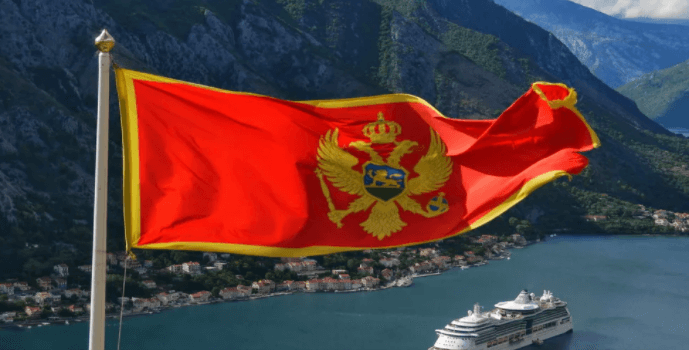 Using the Montenegrin Flag follows special principles based on respect and dignity of the flag, symbolizing the state. The most important symbol is the coat of arms of the country located in the central part. It shows a double-headed eagle – a symbol of Byzantine origin. The composition of two heads and one crown represented at that time the unity of the church and the state. This eagle exists since the time of the ancient dynasties.

Lion, located in the central part, is a symbol of bishopric and conceived as a Metaphor of Lion Jewish. His origin may be due to the banner of St. Mark of the Venetian Republic.

Although today Montenegro is a republic, its symbols reflect the greatness of its past and the constancy of the Spirit in the present. As a majority of European symbols, colors do not have a specific value but are historical heritage.

Flag of the Kingdom of Montenegro

The principality was recognized internationally in 1878 during the Berlin Congress and was independent over the centuries. Prior to this, the informal banner was presented by St. George Red Cross on a white background. With the adoption of the princely throne in 1860, Nikolai I, who in 1910 received the title of king, the cross wore the ruler’s initials with red Cyrillic symbols.

In 1878, an official symbol of red, with an eagle in the center and initials H was adopted with recognition of independence. I. Since 1910, a banner consisting of three horizontal stripes of the same size with flowers of red, white, blue stripes and a coat of arms depicted on the current banner was introduced with the proclamation of the kingdom. It was used until 1918, while the country has not lost independence.

From 1945 to 1992, as one of the six composite republics, the Tricolor was adopted, used during the Kingdom of Montenegro. In the center of the panel, there was a red star instead of the old coat of arms.

After in 2003, the structure of the state was changed to a confederation with the official name of the State Union of Montenegro and Serbia, in 2004 a new symbol was pronounced. He became national in 2006, with the proclamation of the country’s independence.

Description of the flag of Montenegro

The old flag of Montenegro was also performed on a red canvas framed by a gold stripe. 1: 3 ratio forms an unusually elongated option. The center has a national emblem. She depicts a double-headed golden eagle with a golden scepter on the right and a blue-green sphere with a golden cross on the left.

Eagle carries a blue shield with a gold lion on his chest, the crown rises above his head. The banner resembles the emblem of the Petrovich family and was officially adopted in 2006 when the population of Montenegro decided on a referendum that they separated from Serbia and created an independent state.

There are two geometric versions of state symbols:

In addition to the country’s attribute, which can be used at civil, government, and military levels, there is another option specifically used at sea, in the naval sector. This is a very elongated cloth with a 2: 5 ratio, which operates at the official level from July 22, 2010.

It was also decided to use the Naval Flag. In its upper left corner (next to the mast) there is a banner of Montenegro, as well as a white anchor shield and three white waves, symbolizing the sea surface.

0
The flag of Sweden can rightly be called one of the oldest government symbols.
Leave a Reply Cancel reply
← Flag of Croatia: meaning and colors ← Lesbians flag: colors and meaning