The Circassian flag is a symbolism of the state, on the canvas of which is located 12 stars. They personify Circassian subtends. As an emblem of stopping hostilities between Adyg’s principalities and in the form of the symbolism of unity, arrows are placed that cross. The green tint of the canvas indicates life in nature and age-old Circassian forests.

Adygea attributes personify the prototype of a small homeland, which is in the soul of each person of this nation. History Banner of Cherkessia begins in the first half of the 19th century. Symbolism was designed in honor of the independence obtained in the Caucasian War (1836).

Adyg’s flag – is a national symbol. The green canvas of the rectangular shape depicted gold stars. The most common interpretation is the connection with substations – the main Circassian tribes that previously inhabited these lands. Crossed arrows indicate the main generic principalities.

The second version indicates unity and the world. This personifies the arrows that are crossed with each other. Previously, in peace times, the Circassians wore 3 arrows, which indicated their belonging to elite soldiers. If the arrows looked up, it pointed to the world, if they were crossed, it symbolized unity. Symbols left during the times of the heroes of the Nart Elos – to the flush, which was the patron of blacksmithing craft.

The origin of the flag of Circassia has an interesting story:

Urkvart was on the side of opponents of the Russian Empire. 2 years after the last events, there was a provocation led by Schoon “Vixen” on which weapon was smuggled. Such a move made it possible to raise the issue of finding a country in Russia.

The flag was produced in Turkey with the hands of Cherkhenyki, which had a high-ranking position. The banner was brought to their homeland and began to use as a national symbolism. But some historians still converge in the opinion that the sketch was made by anyone else like David Urkvart.

After the end of the Caucasian war, the banner of Circassia was prohibited. For 100 years, his image was considered lost and spent in the fly.  But then the symbolism was discovered in the book. Spencer, who heard the English traveler.

Restored the Circassian flag in the 80s, when democratization reigned in the USSR. The public attributed at the congress Adyge Hase. In the spring of 1992, after Adygea proclaimed the republic, the symbol was approved at the state level on legal grounds.

Day of the Circassian Flag

Celebrations in honor of the Circassian flag began to celebrate from 2013 after the adoption of the law of changes in holidays, as well as memorable dates of the country. Up to this point, the celebration was conducted for several years. The initiators were local movements and existing thematic organizations. 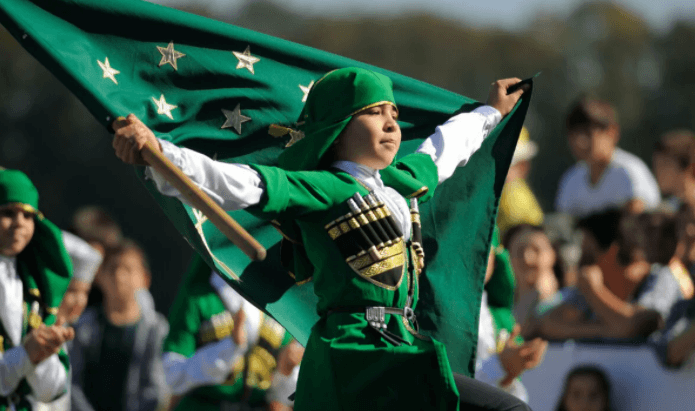 By tradition, the celebration in honor of the Circassian flag is celebrated on April 25. Activists organize parades and autarchies. Also traveling riders who hold the national clothes in their hands, which depict the attribute approved together with the Republican status. The adoption of the law had to be in the spring of 1992.

The National Museum stores two samples of Circassian flags that are distinguished by an interesting and enough difficult story. We are talking about Natukhaev and Chapsuga of the 19th-century banner. Relics over the years are studied by the Museum staff. Information in parts is restored, but many details of the past will not be clarified. It is not surprising, t. To. Symbolism has more than 200 years. The first information can be attributed to the times of the Caucasian War.

The fighting flag of Cherkessia was captured in 1840 when he was assigned to the Abinsky fortification. The details became known only in 1865 when the Military Historical Museum in Tiflis was opened. There was a banner until the 20th century together with other relics of the people.

A new stage in the history of the country was the restructuring when censored and a lot of other prohibitions disappeared. Historical banners were exhibited openly, so researchers were granted access to them, and they were able to restore some historical facts.

0
The flag of Sweden can rightly be called one of the oldest government symbols.
Leave a Reply Cancel reply
← Flag of the Third Reich ← Flag of Yugoslavia: meaning