Skip to content
Flags-World » Flags of international organizations » The flag of United Nations: picture and colors

The flag of the United Nations is the official symbol of an organization formed during World War II to ensure peace and solving any interstate conflict peacefully. So there was a UN, the founders of which were 50 countries. The basic principles and functions of the organization are fixed by the Charter. There is also a UN emblem, and read the article, you will learn – why the flags fly before the UN building.

Flag of the United Nations: photo

The history of the UN flag begins with the history of the creation of the emblem, which was preparing for the conference in San Francisco. The Secretary-General of the Organization set the task to ensure that the Assembly approves the proposed sketch. And in the second session of the General Assembly, the Memorandum was presented to the participants, where the organization needs its flag, as the UN will be presented in different parts of the world and different institutions. 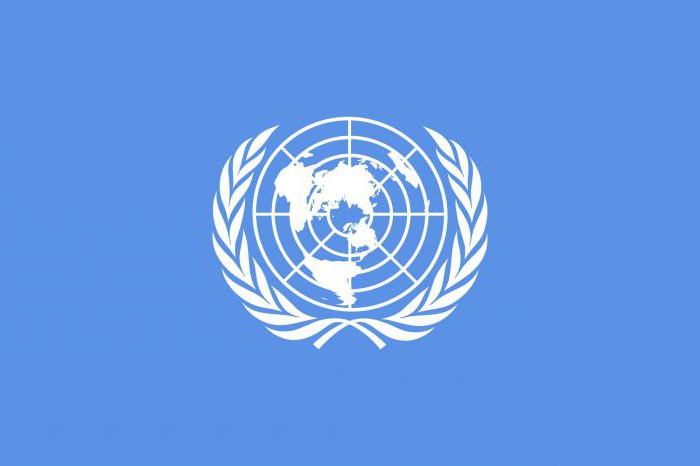 Thus, on October 20, 1947, the Assembly adopted a resolution, where it is indicated that the official UN flag is the official emblem approved by the General Assembly, placed on the blue cloth.

How many countries in the UN

To date, the UN is one of the most numerous organizations in the world, its composition includes 193 countries. From independent states that are recognized in the world, the organization does not include the Vatican. The last time the number of UN members changed was in 2011 when South Sudan was adopted. After that, the list of participants was not replenished.

Article 4 of the UN Charter approved the requirements for the state that claims to membership in the organization. The document says that the UN member has the right to become a peace-loving state, which will take on all the obligations approved by this Charter, as well as, according to the organization itself, these obligations can perform.

Important! Reception of the country in the UN is fixed by the Decree of the General Assembly on the basis of the recommendations provided by the Security Council.

By Article 6 of the UN Charter, the state that regularly violates the regulation can be excluded from the organization. The appropriate decision adopts the General Assembly based on the recommendations of the Security Council.

All 193 flags fluttering before the UN building – this confirms the fact of the participation of all countries in the organization’s activities.

What is shown on flags of the United Nations?

The official symbol of the UN was adopted on August 20, 1947. It depicts an emblem, which also has an interesting story. Work on its creation was conducted in the year of the end of World War II. Initially, the emblem was planned to be used only at one conference scheduled in 1945 in San Francisco.

Interesting fact! It was this conference that I became a sign, as the Charter of the Organization was approved on it.

Specialists of the US Strategic Services Department worked on the creation of a symbol. A project consisting of a world map in the form of an equidistant polar azimuth projection was approved, as well as two branches of Olive. These two symbol most accurately and fully symbolize the goal of creating and the existence of the UN – maintaining peace around the world. The use of the emblem is possible exclusively with the permission of the Secretary-General of the Organization. In December 1946, the emblem was approved officially. This emblem is located in the center of the UN Flag.

What color flag of the United Nations

As the main color for the web is chosen, blue, like the color, most firmly associated with the world. It is noteworthy that strict restrictions on the use of the UN emblem do not apply to the official organization flag. It is sold as souvenirs, but solely after receiving the written permission of the Secretary-General.

United Nations flag painted in blue color, not by chance. The authors tried to find a shade that would fully display the concept of organization. Thus, it was decided that the blue color is opposite to the military, red. Another interesting fact – the exact shade of the Blue is not approved in any official document of the UN, but initially, Pantone 279 was selected. The first version of the flag, proposed in 1946, had a rather gloomy grey-blue shade, they decided to refuse blue.

The emblem on a blue-white background – why it is chosen exactly the combination of colors – unknown. In official sources, no information is missing. In this issue, historians and scientists are building guesses and offer their assumptions. Most likely, white is best contrasted and combined with blue, emphasizes the fundamental purposes and UN tasks, symbolizes the world and purity. Many people see in the combination of blue and white flowers, cloudless sky.

0
Flag of NATO – Official Symbol of the Alliance, united by 30 countries from
Leave a Reply Cancel reply
← List flag of the Commonwealth of Independent States ← NATO: photo, flag, decryption, what it is