The Alaska flag as used now was approved in 1926 (re-certified in 1957, when the territory was defined as a separate state, which is part of the United States of America). This is a blue canvas with 8 pointed stars. There is an opinion that the flag of Alaska created a 13-year-old boy. Who is actually the author of the panel, and also what is depicted on it? Is it true that authorship belongs to a LED from the Russian Empire? 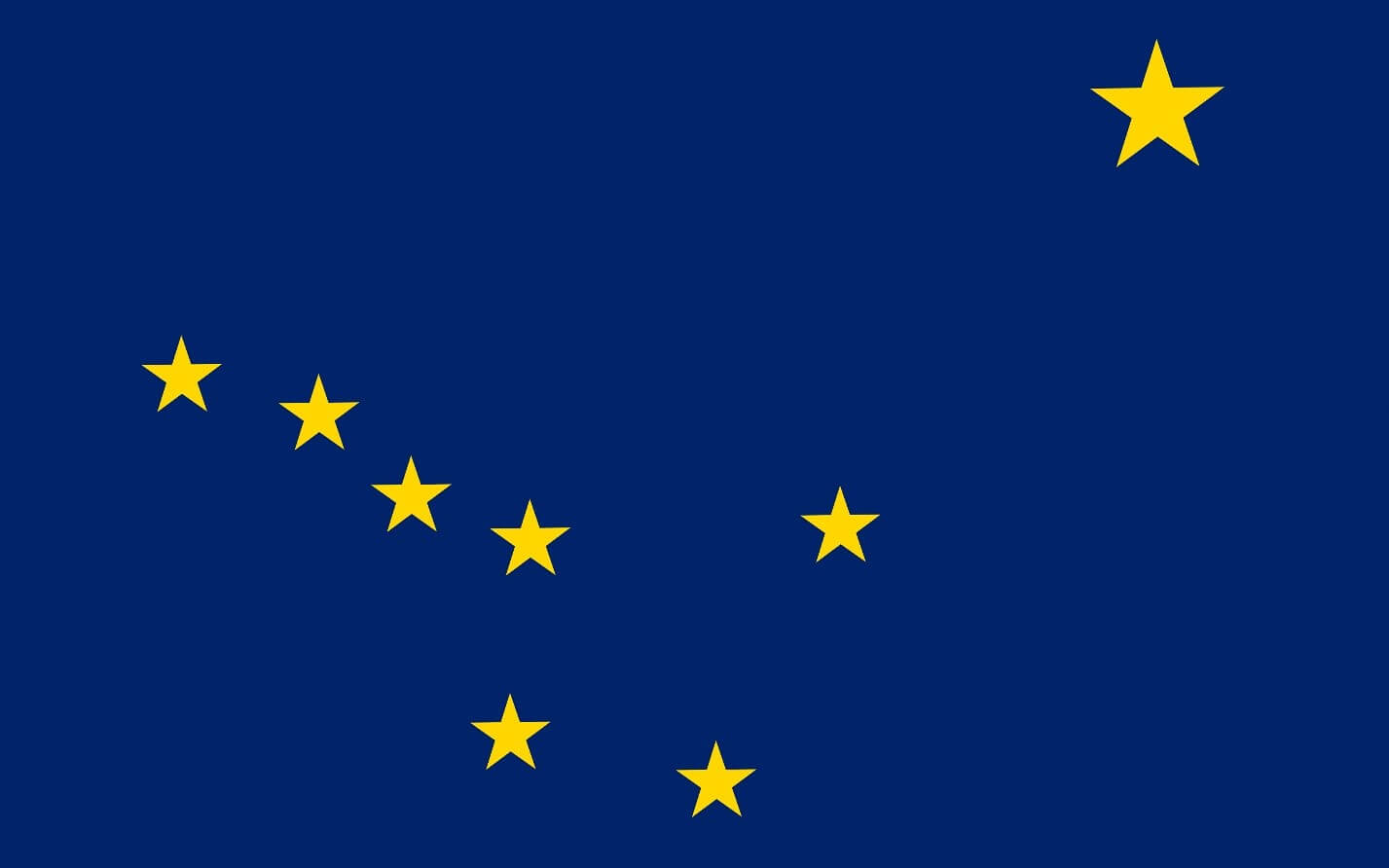 The official flag of Alaska as a separate state is a rectangular cloth with a blue background, which shows 7 stars in the central part, located in the form of “bucket”, as well as a separate pointed star of larger in the upper right corner.

Who created the flag of Alaska

The author of the flag is John Benny Jr. During 1926 – 1927, the Local Council developed and approved the rules for holding the competition. Participants could have all state schoolchildren. And then the 13-year-old boy also won. Although at the consideration of the collegium was an increase of 142 options sent by each of the Alaska Board (Commonwealth of cities, which can be considered to be considered by the states). On the flagpole flag in July 1927. But John Benny himself has attended in a solemn lift. For his victory in the competition, he was awarded:

Benny Jr. quite accidentally took part in the competition. At that time he studied in the city of Seward (came to the shelter on the instruction of the Father, to get secondary education). And his sketch is one of the simplest, which came to the second stage of the competition. In the future, his life is not much different from the rest of the states. He worked most of his life with a mechanic and engaged in the repair of civilian aircraft (main transport on the peninsula). 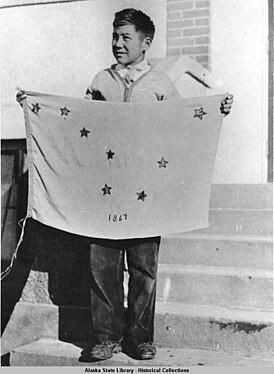 In the period from 1799 to 1867, the flag of Alaska was represented by the pride of the Russian Empire (Tricolor). From 1806 to 1867, he was depicted as a double-headed eagle in the coat of arms (in the upper left corner). After the transition of the Peninsula under the US, jurisdiction was used by the traditional flag of America (red and white canvas, in the upper left corner – stars, symbolizing the number of states). 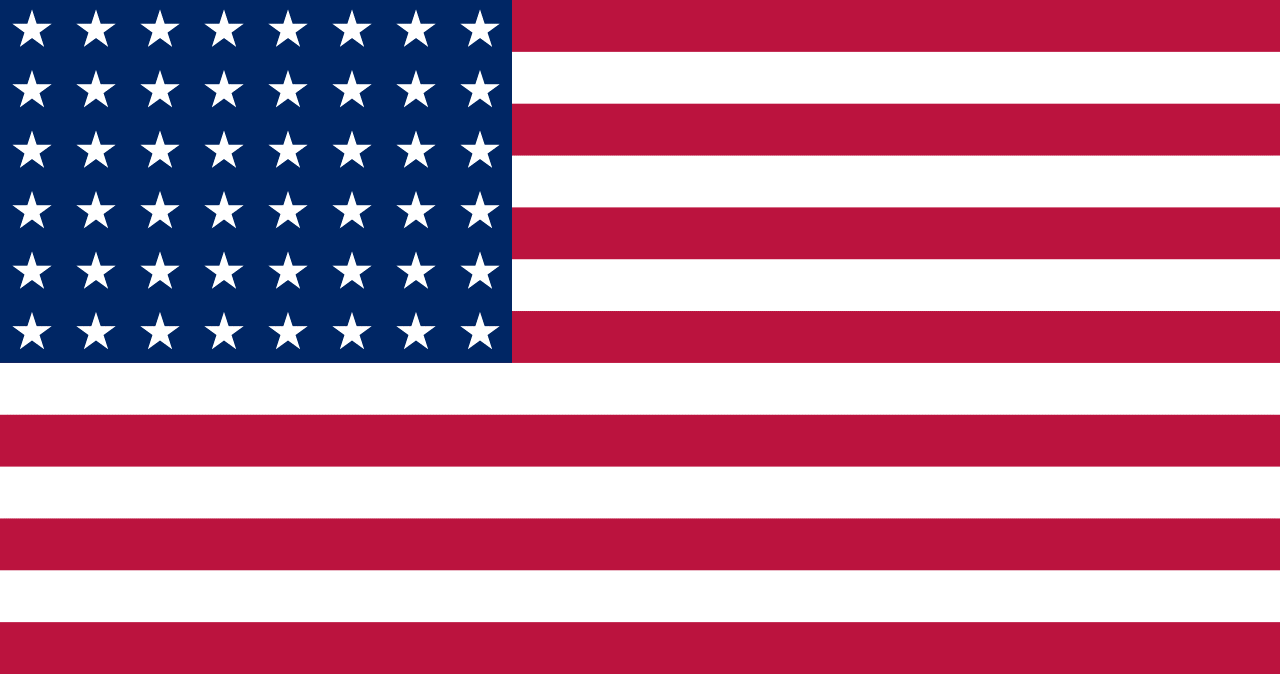 By the way, John Benny Jr. mainly has Russian roots. His mother is half Russian, but his father is a Swede. There is an opinion that John did not accidentally become the winner of the competition. It was his “good gesture” by US officials, demonstrating a favorable attitude towards representatives of mixed roots (exactly the inhabitants and constituted the basis of Alaska). After all, John belonged to the group of Eskimos.

In honor of Benson on the peninsula, called the airport in Kodiak. And in a pair of miles from Seward, he was opened by a memorial. Benson is one of the most revered inhabitants of Alaska. And back in 2013, not far from the shelter, where he studied in childhood, in honor of John, called the mountain.

What constellation is shown on the flag of Alaska

What symbolizes 7 stars on the flag of Alaska? This is the constellation of a large bear, which is interpreted as spirituality, power, and unity of the people. A separate star in the upper right corner is a polar star that symbolizes the state’s commitment to the northern territories. By the way, John Benny’s competitive work with a sketch and explanation and is now kept in the Museum of Alaska. There is also a black and white photo directly from the pippore raising ceremony on the flagpole. The author himself died in 1972 from a heart attack. 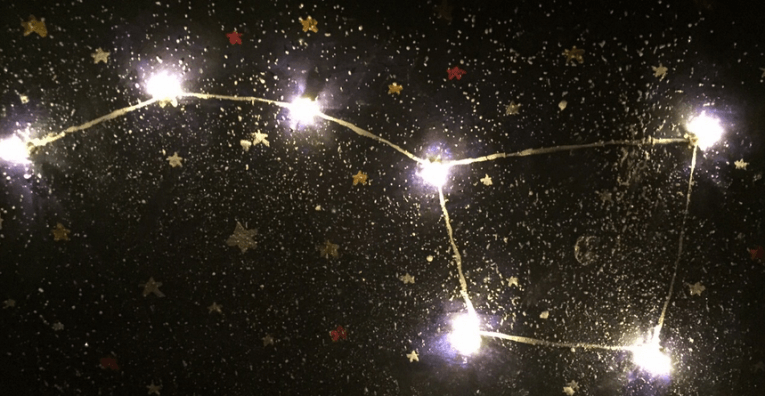 The blue background is also chosen accomplished. It symbolizes 2 things at the same time:

Total, on the state flag, depicted the constellation of a large bear and a polar star. Who created the flag of Alaska? It really was a 13-year-old schoolboy participating in the competition by order of teachers. The flag is approved in 1959, at the present time its image does not change

Rating
( 2 assessment, average 5 from 5 )
You may also be interested in

0
The Republic of El Salvador – the government, the southern part of which is
Leave a Reply Cancel reply
← Flag of Jamaica: colors and meaning